“Tea is the second most consumed drink after water.” Some say green tea is the healthiest beverage to drink. Many people rave the benefits it has on the body due to its high levels of antioxidants and nutrients. Drinking green tea regularly definitely has a positive impact on the body. Today I am going to explain these benefits and why you should be drinking more of this.

The most bioactive compound found in green tea is called epigallocatechin gallate (EGCG). EGCG has many notable health benefits. For one, it is a powerful antioxidant which helps neutralize oxidative damage from free radicals. Free radicals are molecules which attack your cells and are seen increasingly through age. The brain uses a whopping 20% of the oxygen we breathe in, thus being more prone to oxidative damage causing neurological disorders, neurodegenerative diseases and even decreasing cognitive functions. EGCG safely interacts with these free radicals and stop cells from being destroyed.

Another benefit green tea has is increasing your concentration and alertness. Due to an amino acid called L-Theanine it increases the levels of neurotransmitters serotonin, dopamine and GABA. This increases motivation, improves recall, learning and positive mood. L-Theanine also has a relaxing effect without the sedation making you drowsy.

So you drink coffee to get you through your day? What do you do when you take a caffeine crash? Some people drink 3 – 4 cups of coffee a day just to wake themselves up from their previous caffeine intake. What if I told you green tea can give you the same boost in energy without the extreme tiredness, irritability and inability to concentrate. Like coffee, green tea has caffeine. While this is nowhere enough to give the same effects as coffee, green tea has L-Theanine. Like I explained earlier this amino acid increases concentration and alertness and coupled with caffeine it can boost your mental performance without the side effects.

Some studies have shown that drinking green tea can help intensify levels of fat oxidation and the rate at which your body turns food into calories. Due to a compound known as polyphenol studies are showing that it can help decrease body fat.

There are so many more other benefits from drinking green tea regularly that it is hard to count. To sum up, green tea can greatly improve concentration levels, reduce chances of neurological diseases, boost your energy and even help you lose body fat. If someone asked what the healthiest drink in the world is, green tea would be the answer. Why don’t you go and have a cup yourself and see the changes. 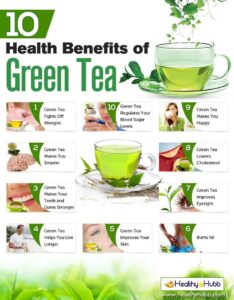 Can You Live Without Water?
Toxins In Your Laundry Detergent