Firstly, let’s look at heavy drinking or binge drinking. As fun as it may be, there is absolutely no evidence that points towards this sort of amusement as being anything other than detrimental to our health. Numerous research studies have found links between moderate-heavy drinking. That is, equalling or surpassing the weekly recommended allowance, and problems with fertility.

The way in which heavy alcohol consumption affects female fertility isn’t properly understood. However, hormonal imbalances are one of the most likely explanations. A study published in a 2000 edition of Alcohol and Alcoholism found that women who enjoyed moderate-heavy drinking had significantly lower levels of progesterone than non-drinkers. Progesterone plays a vital role in conception. It is fundamental in keeping the thick uterine lining, and implanted egg, in place. Low progesterone levels mean that the lining is more likely to shed each month.

The same study found that drinkers had increased estrogen levels, which are often present in women suffering from endometriosis. Indeed, further studies have confirmed that ‘alcohol intake positively associates with endometriosis‘. Abnormally high estrogen levels can cause cells outside the womb to thicken in the same way as the uterine walls. Known as endometriosis, these cells can cause damage to both the ovaries and fallopian tubes. That means some cases don’t lead to the successful completion of the ovulation process. As you’ll know, you can’t get pregnant naturally if you don’t ovulate.

The effects on in-vitro fertilization (IVF)

The research has also suggested that alcohol can even affect assisted conception. Some researchers have proposed that alcohol can not only create an inhospitable environment in the uterus but also decrease egg production and quality. Those are two aspects that would contribute to IVF attempts. A study by the Harvard Medical School put forward the notion that drinking just half a bottle of wine per week could lower the chances of conception via IVF by up to 18%.

There are some gaps in the research on the effects of light-moderate drinking on conception. However, many studies do argue that even the occasional drink can cause fertility problems in women. There have been two studies. Infertility in Women and Moderate Alcohol Use (1994), and Does moderate alcohol consumption affect fertility? follow up study among couples planning first pregnancy (1998). They both conclude that even light-moderate drinking can reduce the likelihood of conception by a significant margin.

Doctors have even claimed that giving up alcohol completely can be as effective in treating fertility issues as IVF. They have reported a 33% chance of getting pregnant via assisted conception, and a 32% chance of getting pregnant naturally by cutting out the booze. Even if light-moderate drinking doesn’t necessarily cause infertility, it can certainly increase the amount of time it takes to become pregnant.

It’s not just women’s habits that are under the microscope when it comes to how alcohol affects fertility. Conception is a joint effort, so if a woman’s alcohol intake can be an influencing factor, then it makes sense that a man could, too. Unlike with female fertility, it’s far easier to accurately view the effects of alcohol on sperm.
One study, ‘Direct effect of alcohol on the motility and morphology of human spermatozoa’ added alcohol directly onto healthy sperm in concentrations that would be similar to that if the alcohol was consumed.

Mobility, motility, and velocity of the sperm all decreased, while incidents of tail deformities increased. This could not only affect the sperm’s ability to reach the egg in the first place, but also the ability to create a healthy embryo. This study involved moderate-heavy drinkers. In the case of light-moderate drinkers, the research suggests a 14% decrease in IVF success rates when men have consumed as little as half a bottle of wine per week. 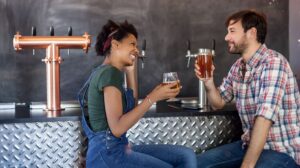 Fertility and Coffee. Friends or foes?
Fluorides in Your Toothpaste