Chiropractic care is amazing for expecting mothers for many reasons. A common complication of pregnancy/birth is when the baby ends up in the breech position, and this is actually something that chiropractic care can help with.

What is a breech baby?

Usually, during pregnancy, the baby is in such a position to come out head first through the birth canal. This is the easiest and safest position for the baby to leave the mother. However, in around 3-4% of pregnancies, the baby will be in such a position that its feet are in the direction of the birth canal instead of the head. This is called a ‘breech’ position and can lead to complications during birth, both for the mother and the baby. Breech babies usually require some type of intervention, such as Caesarean section. 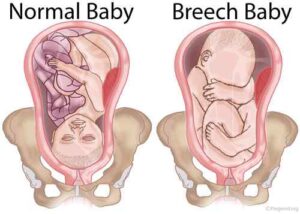 The position of a baby is not sure until it has hit the 35-36 week mark. This is because before then a baby will often naturally turn around in preparation for birth. After this time, however, the baby has usually grown too much and does not have enough room to turn around comfortably. Some breech babies will still naturally turn around after this point, but some may stay in this position, requiring some type of intervention.

There are no definite known reasons that breech babies occur, but some possibilities are:

How can chiropractic care help with breech babies?

So you may be wondering where chiropractic care comes into this? Chiropractors don’t deal directly with the baby while it is still inside the mother. However, by adjusting the mother, this can often lead to the baby turning naturally, without the need for medical interventions.

The chiropractor will check and adjust the spine of the expectant mother, including the pelvis. Chiropractors are trained in checking and adjusting the bodies of pregnant women, modifying the adjustments when necessary, and making sure everything is safe and comfortable. There are even pregnancy-specific techniques, such as the Webster technique, that the chiropractor can use to adjust the mother. Webster technique addresses the sacrum and the round ligament, which has a direct attachment to the uterus. Along with adjusting the rest of the pelvis, this technique relieves pressure from the uterus, creates a more stable pelvis, and therefore creates more room for the baby to move around in. In many cases, this relief of tension from the uterus and increased space has allowed enough room for the baby to turn on their own, without the need for medical intervention. This helps ensure a safer and more comfortable birth for both mother and baby. It can also give the mother more peace of mind leading up to the birth, as it can be quite stressful for the mother knowing that her baby is breech, and create a lot of worry and uncertainty around what is going to happen during the birth.